Hainan is the smallest and southernmost province of the People’s Republic of China, consisting of various islands in the South China Sea. Hainan Island, separated from Guangdong’s Leizhou Peninsula by the Qiongzhou Strait, is the largest island under PRC control (Taiwan, which is slightly larger, is also claimed but not controlled by the PRC) and makes up the majority of the province. The province has an area of 33,920 square kilometers (13,100 sq mi), with Hainan Island making up 32,900 square kilometers (12,700 sq mi) (97%) and the rest divided among two hundred islands scattered across three archipelagos. It was administered as part of Guangdong until 1988, when it became a separate province; around the same time, it was made the largest Special Economic Zone established by Deng Xiaoping as part of the Opening Up of China. There are a total of ten major cities and ten counties in Hainan Province. Haikou on the northern coast of Hainan Island is the capital while Sanya is a well-known tourist destination on the southern coast. The other major cities are Wenchang, Qionghai, Wanning, Wuzhishan, Dongfang, and Danzhou.

China’s controversial claims in the South China Sea, including the Nansha and Xisha Islands,[4] are notionally administered as part of the province. 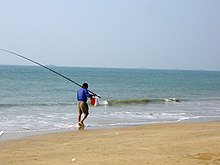 Located in Sanya, this beach is typical of those along the entire eastern coast of Hainan

Popular tourist destinations include the beaches and resorts in the southern part of the province. Inland is Five Finger Mountain, a scenic area. Tourists also visit the capital of Haikou with area visitor attractions such as Movie Town Haikou and Holiday Beach.